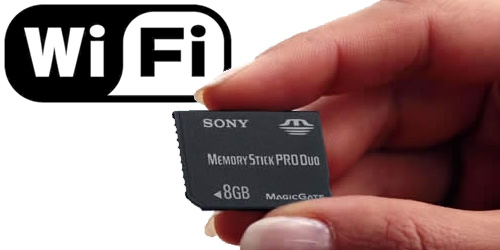 Sticking with the theme in trying to find wireless memory cards (WIFI MiniSD, WIFI SD) I took the time to see if a WIFI Memory Stick Pro Duo was available. I searched high and low and to my dismay I found nada. It seems with the development of technology and everything moving ahead towards wireless, it seems that Sony has not developed a WIFI product for their proprietary memory card.

The Possible Uses of a Wireless Memory Stick Pro Duo

There are many different scenarios in which a WIFI memory stick would be helpful. If you had a Sony digital camera, you could sync the card directly with your PC or laptop. This would save you the hassle of manually transferring the pictures. There is also added features that are associated with the Eye-Fi SD Card; such as uploading to your favorite picture service such as Flickr right there from the camera.

Another useful scenario in which a wireless Memory Stick Pro Duo could be used is as a simple WIFI card. The WIFI MiniSD already does this. For devices that lack wireless capability, all one would have to do is plug the memory stick duo that has built in WIFI and then good to go, you are on.

There are so many uses for a product of this nature. Hopefully in the near future we will see the development of this memory stick. Till then we can only wish.