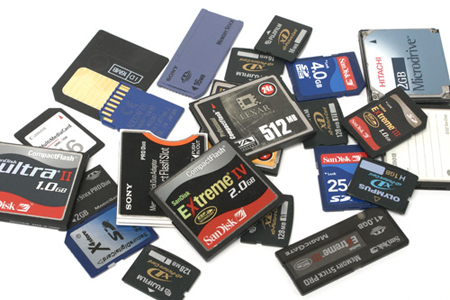 It seems like every day there is an announcement related to new memory card sizes. First we had 4 GB, then suddenly we are up to 32 GB. In January there was the announcement that a SDXC (extreme capacity) card will be released, which means that there will storage space that will reach to 2 TB (Terabytes). All of this will be able to held on a small little memory card.

The past couple of years have seen the growth of the memory card market, due to its demand for use in devices such as cell phones, cameras, camcorders, media players and others. If you own a modern electronic device, then more than likely you will own a memory card.

With so many memory cards needed, there are also different memory card formats. There are the popular SD, microSD, miniSD, CompactFlash and Memory Stick. There are also the not so popular xD picture card, SmartMedia card and MMC. The plethora of electronics has led a trend of their design accepting certain memory cards and ignoring the others. With the unpopular cards slowly being forced into retirement, it will only be a manner of time before they are rendered obsolete.

It seems that in the coming years as some of the memory cars lose their market share, it seems that only two might be left standing. These would be the SD cards (micro and mini) as well as Sony’s Memory Stick.

Even as the flash memory business is growing rapidly, however, some formats are losing market share. And within the next five years, analysts say, a few will disappear altogether.

There is a confusion that exists with consumers as to which memory card will work in their device, but this is slowly changing. More and more devices are using the SD card, while most cell phones only take the microSD card. Memory Stick is still able to stay in the game as it is the proprietary product for Sony devices. This means that developers rarely make devices that use the unpopular cards and that seals their fate. Aside from the lack of device support, cards such as SmartMedia and MMC lack storage capacity. While other cards are offering sizes up to 32GB, these cards are hampered by outdated technology. Devices now need more space to hold more data. You have HD camcorders that require GB’s of space and the outdated cards are unable to keep up.

With MMC and SmartMedia cards, as well as possibly xD picture cards see their market share drop, they should start preparing for retirement. They had a good run, coming in at the start of the memory card era, but popularity wins out every time. They will never be able to catch up or compete with the SD card, which is slowly becoming the industry standard. It is the cycle of technology life and they should be proud of what they have achieved.